I have meant to get around posting about Ontario's second quarter GDP growth after the Finance Ministry released the results recently. As is often the case, I haven't seen any major news outlet reporting on them, but I may have missed it.

GDP growth in the second quarter was 0.2% equivalent to 0.7% annualized, versus 0.8% in the previous two quarters. Population growth in Ontario is around 0.9% annualized, so 0.7% means that per capita GDP actually declined very slightly. The US had an increase of 0.4% and Canada a decrease of 0.4%. I'm wondering if the quarter was affected by the wildfires in Alberta.

The ministry provided this helpful image with quarterly data going back a ways (which is useful in case they revise some quarters). 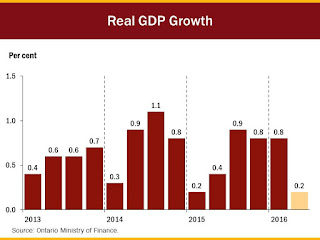 I'm a little surprised at how good the previous three quarters were. The third quarter of 2015 had annualized growth of 3.6% which in this era is excellent. Considering the fiscal year starts in the second quarter, 2015-2016 was a good year for Ontario. Now with the slow start in 2016-2017, this fiscal year could be less impressive. Certainly the 2015-2016 fiscal year corresponded with the Canadian dollar tanking which was likely a strong factor for growth.

Exports were again negative in the quarter: "Exports declined 3.3% in the quarter, following a strong increase of 6.2% over the previous four quarters. The decline in exports was largely concentrated in international goods (-5.3%), with fewer exports of motor vehicles, consumer goods, and metal and non-metallic mineral products." So previous to this quarter, exports likely benefited from the weak currency. What happened this quarter I'm not sure about, although I'm guessing it was auto production related. With slowing auto sales in the US, there could be future problems for Ontario exports.

"Business investment advanced by 0.6%, adding to the 0.9% gain in the first quarter. The second quarter gain was led by a 0.9% increase in residential construction investment, reflecting strong resale activity. Business investment in machinery and equipment (+1.5%) rose, while non-residential structures (-0.8%) declined and business inventories were reduced slightly. Government current (+1.0%) and capital (+0.4%) expenditures rose in the quarter." That is good news compared to what had been going on the last few years in business investment, although the residential aspect is troubling.

"Sales of existing homes were 9.3% higher in the first eight months of 2016, compared to the same period in 2015." So what little growth there was, was influenced heavily by the real estate sector. Any pullback will cause Ontario a lot of problems.

The third quarter numbers should be interesting. The first estimate for US growth was 2.9% annualized after two weak quarters, so perhaps Ontario's exports will bounce back.

A little surprisingly, Ontario has kept electricity prices frozen for the on peak, mid peak and off peak rates for the new period starting November 1st. Ontario sets prices on May 1st and November 1st every year.

2016 was an exceptionally hot summer, so demand was high. Somewhat paradoxically, that's better for rates as Ontario often has a surplus of power and expensive solar and wind have to be paid no matter what the demand is. More solar and wind supply is still slated to come online for some time, so a mild winter with a lot of wind could cause some problems. The rate increase for May 2017 should be interesting.

Update:
Also I forgot that the provincial carbon scheme kicks in in January which will also result in some increasing pressure on electricity prices. Since nuclear, hydro, solar and wind isn't really affected, the only real source that will be affected is natural gas which is relatively minor. I haven't seen an estimate of how much higher electricity prices will be.

Since the start of 2016, Ontario is up 27,200 total jobs, but the province has actually lost full-time 17,000 jobs year to date. That's despite a growth in the working age population of 113,400. So job growth versus population growth has been weak in Ontario in 2016, especially for full-time positions.

According to the Ontario Ministry of Finance quarterly accounts, for the first quarter of 2016, GDP growth was 3.0% annualized. I'm skeptical that the second and third quarters will be close to that considering the weak job growth year to date. Can Ontario have GDP growth with weak job numbers?  Possibly, but that would imply decent productivity growth and given the lack of business equipment investment of late, that strikes me as unlikely. The second quarter GDP number should be interesting.
Posted by Jorge at 4:43 AM No comments:

With the September numbers coming out soon, it is time to say something about the August Ontario job numbers.

In Ontario, seasonally adjust employment was up 10.5K in August, but still down from July, June, May and April. Compared to December 2015, 10.9K while the working age population grew by approximately 100K over the same period.

The September numbers should be interesting, as 2016 is shaping up to be a weak year for employment growth in Ontario.